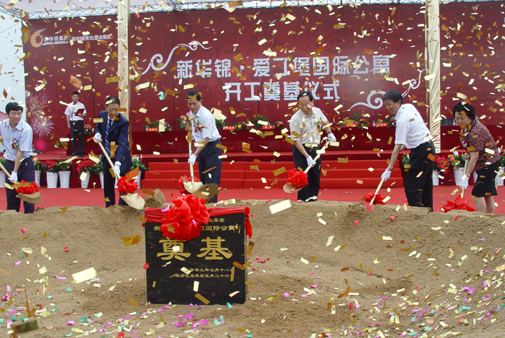 In the morning of July 18, the groundbreaking ceremony of Hiking Edinburgh International Apartment was grandly held. The deputy secretary of the CPC Qingdao Committee and mayor of Qingdao Xia Geng, the vice mayor Hu Shaojun, the secretary-general of Qingdao municipal government Li Zhongmin, and the deputy secretary of the CPC Laoshan District Committee and acting chief of Laoshan District Yang Pengming, together with 300 additional representatives from government departments, media and people from all walks of life and Hiking Group attended the ceremony. Vice mayor Hu Shaojun, acting chief Yang Pengming and chairman of the group Zhang Jianhua delivered speeches in sequence. Then, the guests laid the cornerstone for Edinburgh International Apartment together.
Hiking Edinburgh International Apartment project has total construction area of 260,000m2 with total investment of 2 billion RMB, the project is located at a portal area of Laoshan District, Qingdao, and it is in the core position of the high-end residential area in eastern part of Qingdao. The planned construction includes the roadside shops, apartments and hotel, and it is a large scale project under construction of Laoshan District. The project was listed as a Qingdao municipal key project, and it is to play the important function of stimulating domestic demand, boosting investment and promoting employment.